Historic England has published revised guidance on the impact of tall buildings amid a surge in applications for new skyscrapers. London is at the heart of this dash to reach for the skies, but big schemes are stacking up next to Georgian and Victorian estates that have conservationists and communities worried.

The Government’s statutory advisor on heritage issues said tall buildings should make a positive contribution to city life but warned they can also seriously harm places.

The reshaped guidance, last published in 2007, stressed the need to use local plans to assess which areas, if any, were appropriate for tall buildings.

“Tall buildings should reflect a positive, managed approach to development, rather than being the result of speculative applications for development”.

Areas should be appropriate for tall buildings, as part of an overall vision for a place and protecting the historic places that make an area special.

Consideration also needs to be given about the effect on the local environment such as overshadowing, light pollution and the micro-climate around the base of such buildings. The infamous Walkie Talkie building melting car roofs is a great example of how this can happen, but it’s also whirlwinds collecting rubbish at the base of tall buildings and the social change within an area.

The City of London has been undergoing enormous skywards transformation. While every tower has to ensure that it meets the strict “13 protected vistas” guidance for St Pauls Cathedral, other historic buildings and neighbourhoods get no such protection.

The latest City skyscraper approval, 22 Bishopsgate, will stand as the tallest building in the square mile at 278 metres and form a cluster behind the Cheesegrater (Leadenhall Tower) and Heron Tower. Construction is expected to start early next year and finish in early 2019.

Permission was granted despite objections from members of the public, Royal Parks, the London boroughs of Tower Hamlets and Islington and the charity Historic Royal Palaces. The charity criticised the new design, which unlike the Pinnacle with its slender tapering top is “broad shouldered” and will overshadow the Tower of London.

Boris Johnson, the Mayor of London has also unilaterally declared that he is “strongly supportive” of the proposed building of seven towers on Bishopsgate Goods Yard. His intervention, regardless of what the Council thinks, is a challenge to the concept of localism.

The 11.6-acre site is one of the largest left in central London, a piece of redundant Victorian railway infrastructure that is partly listed, a thick sliver running eastward from the edge of the City, through the territories of the boroughs of Hackney and Tower Hamlets, and crossed by Brick Lane. The proposal, by a joint venture of Hammerson and Ballymore, is to develop a row of luxury housing towers. At their highest they will reach the level of the Gherkin or the Walkie Talkie.

Here’s how it could look: 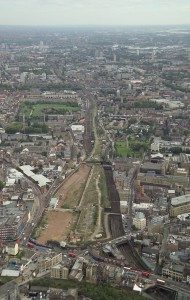 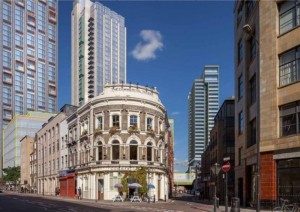 Conservationists oppose it because the towers will impose on views down Victorian and Georgian streets in neighbouring conservation areas, because the design of the new work is generic, and because the relationship of the new to the old is clumsy.

Local residents oppose it because it will cast a slab of shadow hundreds of yards to the north, including on the 1890s Boundary estate.

Ironically, the estate was a world-leading pioneer of council housing, whose arts-and-crafts architecture was based on maximising daylight to its homes, whose light will now be reduced.

Looming menace – is your client protected?

As London looms ever taller, buyers that want to invest in heritage and conserved buildings want to be sure they are secure in their transaction.

DevLondon from DevAssist offers solicitors and their clients a unique, bespoke and detailed review of planning applications, including speculative approaches on land, under freedom of information requests made to the relevant Council.

Our unique two stage approach, as part of your normal search due diligence and again just before exchange, ensures that any last minute hitches are identified and expensive mistakes avoided.

The capital changes every day and you need to keep on top of it, or your client could be on top of you for potential damages if you fail to spot the risks on their behalf.